ARRIVE AS A GUEST, DEPART AS A FRIEND

This is what we personally care as travellers – this is our motto as hosts. 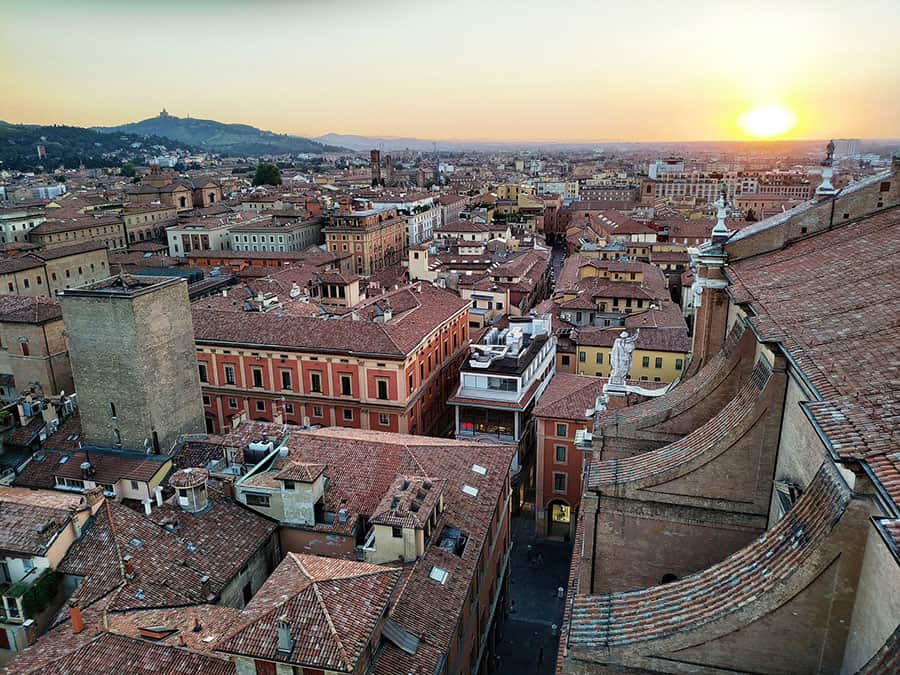 Albergo delle Drapperie is a charming 3 Star Hotel, located in the heart of Bologna’s historic centre, the ancient Quadrilatero, in one of the oldest and most evocative areas of the city. In this stunning portion of Bologna, a few meters from Piazza Maggiore and the Two Towers, between the ancient streets of the Mercato di Mezzo and the prestigious facades that delimit its geometries, stands our small and precious Hotel, elegantly gathered among the artisan shops and the traditional taverns.

During the second half of the nineteenth century, the building that houses the Albergo delle Drapperie was already known as a place dedicated to hospitality. The careful restoration, which has given the property new light and prestige since 2004, and the loving commitment of the family management, have revived a unique reality in the local hotel business. The historical charm and its innate spirit of hospitality combined with the most modern accommodation solutions, make Albergo delle Drapperie the ideal starting point to immerse yourself in the warmth of the city and discover the authentic beauty of Bologna.

Hotel in Bologna Historic Centre - A few steps from Piazza Maggiore and the Two Towers. Comfort and style, in the heart of Bologna. 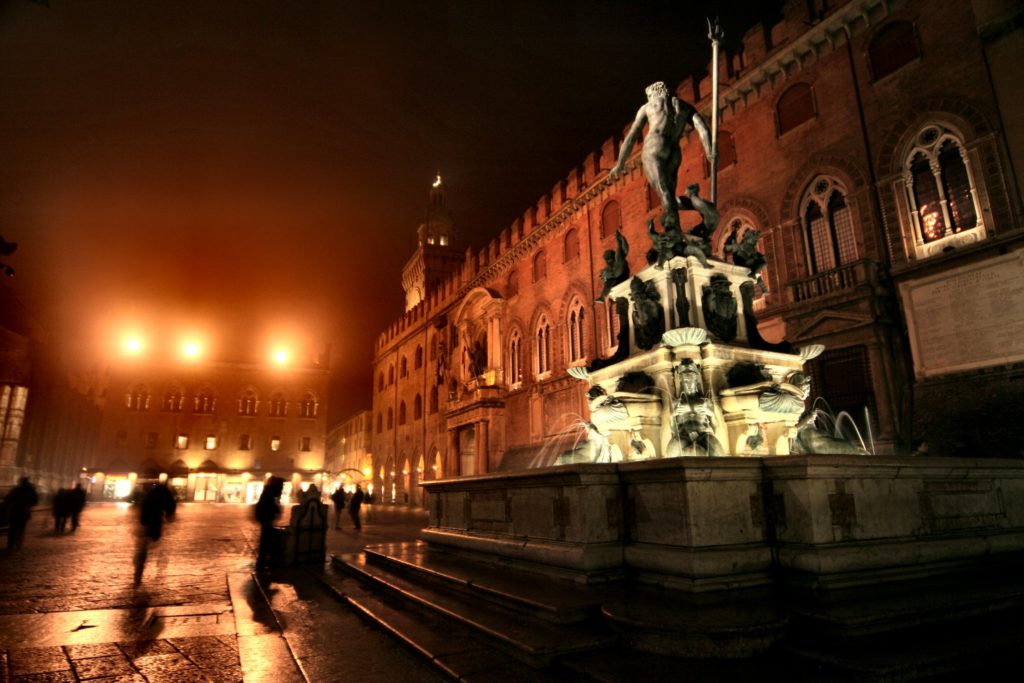 The professional experience of the Caruba Family, acquired in 25 years of Hospitality and Events management, finds its crowning achievement in the consolidated and prestigious reality of this Boutique Hotel in Bologna. Umberto and Rita convey their entrepreneurial vision to the heart of Emilia Romagna Region, embracing the Albergo delle Drapperie project and taking care of every detail. Over the years, their attention and care have contributed to the development of this unique business in Bologna, that combines history, art and tradition with authenticity and lightness, and places every single guest at the centre of a valuable experience.

Guglielmo is the young manager who, with inspiration and a cosmopolitan outlook, has been accompanying, assisting and representing his family in the Albergo delle Drapperie project since 2012.

Since 2018 Albergo delle Drapperie has been working with the precious collaboration of Letizia, Guglielmo’s sister, an entrepreneur in the Hospitality, Banqueting and Wedding business and a fine connoisseur of the dynamics that regulate the success in the creation of Experiences. Letizia embodies the feminine, creative and communicative soul of an activity in spontaneous growth and continuous development.

Today, Albergo delle Drapperie is widely appreciated as one of the best hotels in Bologna in its category.

How and when did your business start?

According to some studies, the Albergo delle Drapperie was an inn with rooms already in the mid-nineteenth century. The history, authenticity, and beauty of this hotel, which is located in an area of Bologna that enchants tourists from all over the world, captured our father’s heart from the very first moment. Our family decided to embrace without hesitation the Albergo delle Drapperie project in 2012. Since then our dreams have taken shape in this hotel. The growth of the Albergo has been our daily commitment. In 2018, my sister Letizia joined us after various experiences developed in the hôtellerie and the events and banquets management business. Today the family is complete and we can actually consider the hotel as one of us, the fifth member of our family.

What does it mean for you to manage a family-run hotel?

The management of an accommodation facility is never easy. I know that for those who have never worked in a hotel it is almost impossible to understand how much work there is behind the creation of a valuable experience, especially in a city that is not yours and that welcomes you for a usually short period. The hotel lives 24/7, on a continuous cycle. An activity devoted to hospitality is renewed, changed and adapted to different needs and stories every day and several times a day. The hotel is the maximum realization of the spirit of welcome, it is hospitality made enterprise, and if all the business processes are managed by the members of the same family, well, you will understand how things can sometimes represent an important and delicate challenge. But at the same time this challenge allows us, mother, father, brother and sister, to rediscover ourselves even more united, every day, to live great satisfaction and often real emotions, which are nothing but the greetings full of affection, the reviews, the recognition of the good quality of our work that we receive from the guests. Moreover, we live this together, we share it among ourselves, and it is our pride. They say that the goal of a hotel is to make the customer feel like at home… and who can convey the sense, care and warmth of a home better than a true family?

Which services do you offer?

Albergo delle Drapperie is a quiet and intimate 3 star hotel of 20 rooms. A real boutique hotel. Each room is different, each with frescoed ceilings and classic and art nouveau style furnishings. The setting recalls and re-proposes the charm and warmth of the past, with everything that cannot be missing in a contemporary hotel.

We offer accommodation in single and double rooms or in charming Junior Suites, and breakfast. This is our standard service. In addition, we make ourselves available from the first contact with the customer for the creation of a tailor-made experience in the city of Bologna. We are always glad to organize guided tours, transfers, personalized excursions or simply recommend the right itinerary for each type of guest, whether shopping, food and wine tours or excursions to discover the amazing cultural offer of the city.

How much does the customer relationship mean to you?

We sell experiences. Everything we do on a daily basis is functional to the connection with the guest. Our guests are the absolute protagonists of our business, because they live it in real time and in an immersive way. Our vision of hospitality and our style follow in a simple way what we look for when we travel. Contact, exchange, authentic immersion in a place that is far from our comfort zone. We look for dialogue with people who can advise us, take care of us and give us those little attentions that are precious when you are in another city, another country or even more in another continent. Beyond the specific features of the rooms, the services offered, the beauty of a view or a decor, which are all very important details for a hotel, what remains in the heart of the traveller giving value to his experience is the human connection. Entering a hotel as guests and depart as friends. We firmly believe this, and we believe this is more important today than ever before.

Perugian entrepreneurs in Bologna. How did you find yourself in this city?

The spirit of the people of Perugia, and of the Umbrians in general, is tenacious, genuine, and courageous. We are not used to show off, nor to talk too much about each other. We act. Concretely. Perugia is a very different city, but somehow also similar to Bologna… This is why, as Perugian entrepreneurs who have managed hotels all over the Country, from Trentino to Sicily, we can say that the territory of Bologna is the one where we found ourselves best. We have related with Bologna with great satisfaction, both humanly and professionally.

Growing and running a hotel in Bologna, as a non-Bolognese and considering the excellent level of the competitors, is a constant challenge and, for us, an inexhaustible source of gratifications and motivation.

So, in conclusion: people of Perugia are concrete, loyal and hard working. They do what they know and they learn all the rest. Our only problem is that there are few of us… otherwise we would have already conquered the world!

"The hotel is a place of dialogue, a place where people and messages meet, it is the rest stop that brings back energy, spirit, hope."